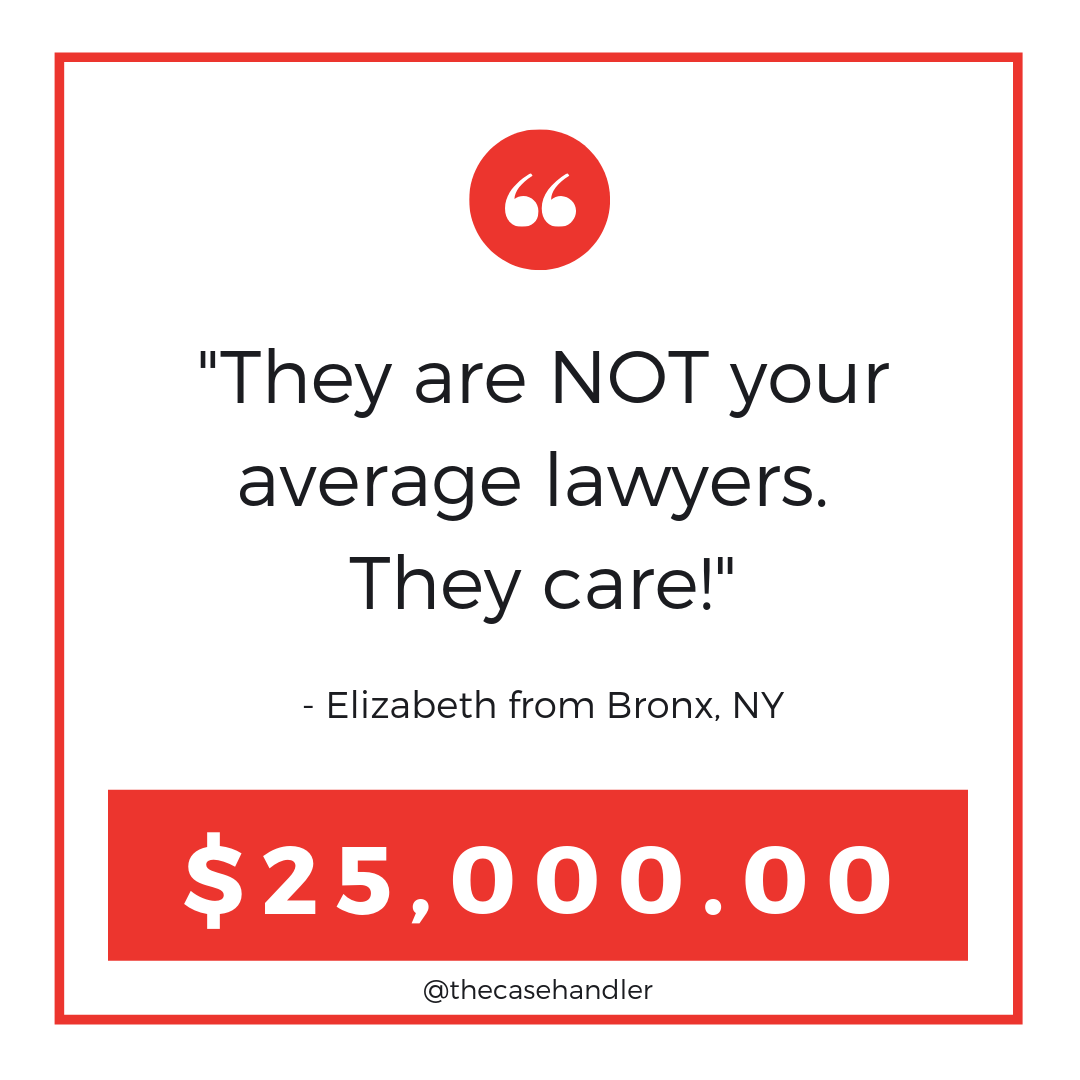 “They are NOT your average lawyers. They care!”

On August 22, 2017, Elizabeth was driving south down Interstate 95 when she noticed a large semi-truck merging onto the freeway directly ahead of her. As the semi-truck merged into the right lane, it sideswiped the truck’s rear against the front end of Elizabeth’s Nissan. Her vehicle sustained critical damage and was towed from the scene of the accident. While no injuries were reported at the scene, Elizabeth was left with pain in her lower back. The pain became so intense that Elizabeth checked herself into Montefiore Medical Center, where she was immediately transferred to Moses Division Emergency Room.

As a result of the accident, Elizabeth sustained damage to the lumbar and paravertebral locations of her lower back. She reported stiffness and soreness that radiated to her lower extremities. She also described a tenderness when touching the lumbar area and noted fatigue and weakness with walking, bending and using the stairs. She also recounted an inability to sleep due to the stiffness that intensified at night. At first, she described her pain as moderate. However, the pain become more severe after a few days that she had to take several pain medications to alleviate her discomfort.

A friend of Elizabeth noticed her worsening condition and suggested she visit The Case Handler team. Elizabeth contacted Adam Handler’s team for a free consultation and got her case started at Pollack, Pollack, Isaac & DeCicco, LLP. Before she met with Adam, Elizabeth was nervous about putting her fate in a lawyer’s hands. However, after their first meeting, she felt comfortable and confident that she had made the right choice!

It can be incredibly difficult to find the right lawyer, especially under such stressful conditions. With The Case Handler team, Adam and his team at PPID will fight hard to ensure that you recover the most compensation you deserve for your case. The Case Handler team successfully recovered a $25,000.00 settlement for Elizabeth!

Semi-Truck accidents can take a serious toll on those involved and often result in extensive hospital stays and long periods of rehabilitation. The costs involved for medical care and extended time away from work can cause major financial hardship for victims harmed in an accident. Semi-trucks as some of the most dangerous vehicles on the road to encounter an accident with and there are about two million of these vehicles on the road. If you or a loved one has suffered a Bronx semi-truck accident, you deserve the help from a reputable NYC personal injury attorney. Speak with one of our Bronx semi-truck accident lawyers to learn about your legal options to recover damages and/or file a bodily injury claim. Don’t wait until it’s too late! Call Adam Handler at Pollack, Pollack, Isaac & DeCicco, LLP today to get the representation and personal attention you deserve.