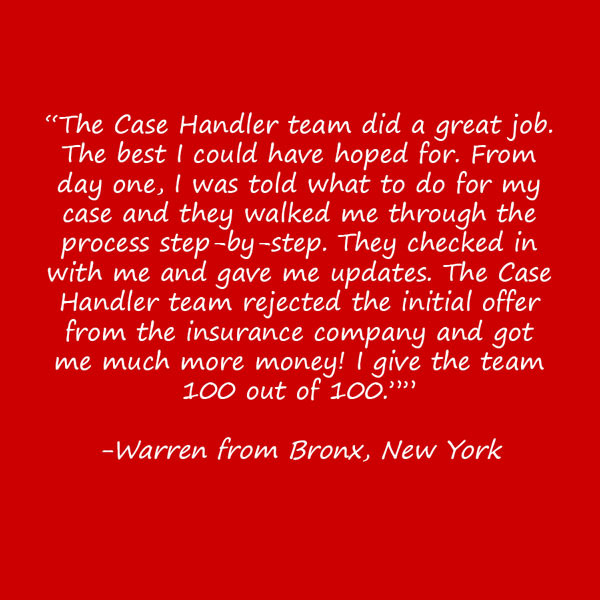 “The Case Handler team did a great job. The best I could have hoped for. From day one, I was told what to do for my case and they walked me through the process step-by-step. They checked in with me and gave me updates. The Case Handler team rejected the initial offer from the insurance company and got me much more money! I give the team 100 out of 100.”

On December 10, 2016, Warren was driving on Paulding Avenue with his wife when he reached a stop sign. When he stopped, Warren was rear-ended by another vehicle. Fortunately, Warren and his wife were wearing their seat belts. The driver that hit Warren’s vehicle got out of the car to make sure everyone was OK and immediately got back in their car and drove away.  While fleeing the accident scene, their license plate fell off and landed on the street! Warren saw it and took a picture of the license plate. He was soon taken to Jacobi Medical Center by ambulance to have his injuries evaluated.

As a result of the accident, Warren suffered injuries to his back, arm, neck and left leg. In his arm, he described a weakness and numbness that worsened with movement. His lower back and leg pain felt sharp and worsened with turning, bending, sitting and lifting. He described his pain as a 7/10 and took pain medication to alleviate his discomfort. Warren went to physical therapy 5 times a week for 2 weeks and then 3 times a week for a few more weeks.

For years, Warren had heard of Adam Handler and the work his team does in the community for injured victims.  After his accident, Warren called The Case Handler team for a free consultation and got his case started at Pollack, Pollack, Isaac & DeCicco, LLP. It’s incredibly difficult to handle cases that involve a hit and run vehicle. Since Warren had the other driver’s license plate number, our team was able to successfully locate the at-fault driver!  The Case Handler team fought hard with the insurance company and successfully recovered a much higher settlement recovery than their initial offer!

Rear-end accidents are all too common in busy states like New York and New Jersey. Having only one opportunity to obtain compensation for your personal injury case makes your choice in a lawyer a crucial decision. Adam Handler – The Case Handler is a reputable and trustworthy lawyer who genuinely cares about his clients. He will fight for every last dollar he believes you are entitled to.  Choose a lawyer that won’t just settle your case to get you out the door, by a lawyer that will reject offers to get you “much more money!”