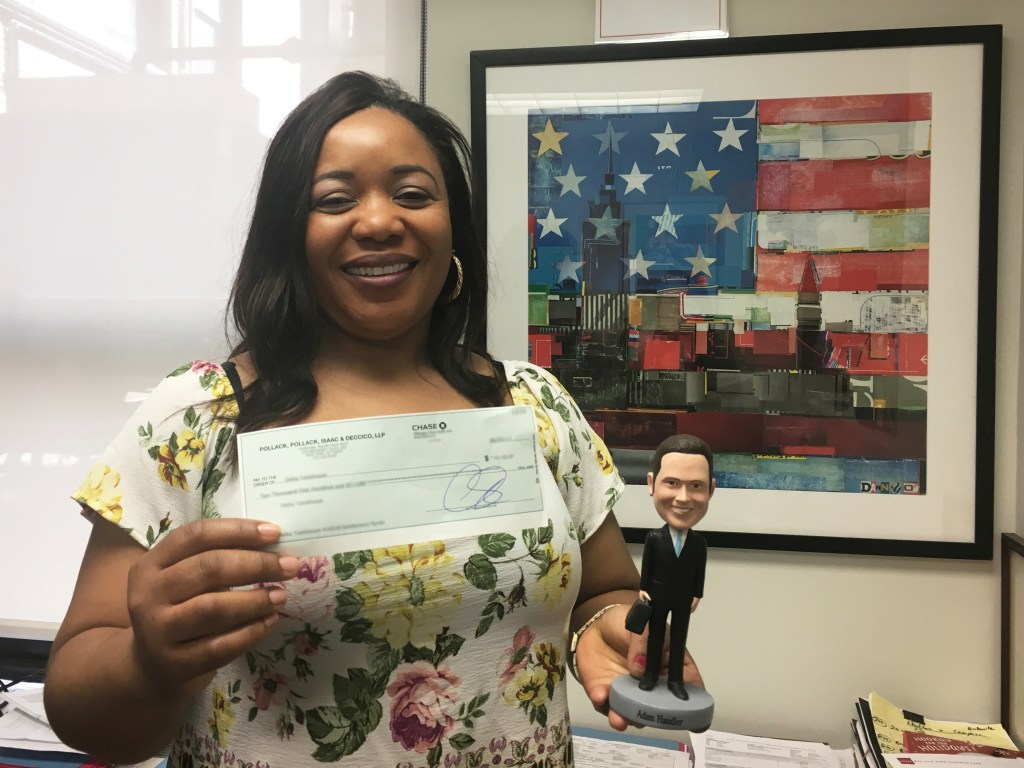 “I would recommend Adam to anyone with no hesitation. You’re in good hands with The Case Handler. They did excellent and fought hard for me. Before I hired Adam, I was actually turned away at the physical therapist office since they refused to treat me because my case did not have a police report. Thankfully I met a client of Adam’s that was treating at that same office and said the best things about him and his team.  I contacted Adam and received treatment without anymore issues. Thank you Adam and Sandra!”

On November 11, 2014, Safari took a taxi to go to her friend’s house. While riding in the back seat, a vehicle from behind struck the rear of Safari’s taxi. With no warning and time to brace for the impact, Safari’s body was tossed forward and hit her head on the back of the seat in front of her. Her head immediately started to hurt and she felt dizzy after the accident.  The police never came out to take a report of the accident, but the ambulance did arrive thankfully.

Safari was taken by ambulance to the Emergency Department at Montefiore Medical Center where she was evaluated, treated, and discharged to go home later that day.  She continued to experience muscle spasms and pain on her neck, shoulders, and back. To improve her condition, she went to a physical therapist to treat her injuries. Unfortunately, since a police report did not exist for her accident, they refused to treat her.  Thankfully, one of our client’s was in the waiting room and told Safari that she needed to call The Case Handler!

Thanks to a wonderful client of ours, Safari contacted our team for representation and was able to receive treatment for her injuries due to recognized representation by The Case Handler team.  Even with NO police report, Adam Handler – The Case Handler stepped in and helped Safari successfully recover $20,000.000 from the insurance company.

While it’s not impossible to handle your injury claim and medical treatment on your own, Safari’s experience is a perfect example that it won’t be easy to do alone. For over a decade, The Case Handler team has helped hundreds of injured victims get the treatment they desperately need and compensation they deserve. If you were injured as a passenger and need help getting the treatment you need, contact a respectable Bronx rear end taxi accident lawyer as soon as possible.

Since 2004, I have been obtaining justice for accident victims by making sure they receive full compensation for their injury, medical bills and loss of income. To date, the total recovery for my clients has been over $130 million $130 million dollars. The law provides for a one-time recovery in personal injury actions making your choice…