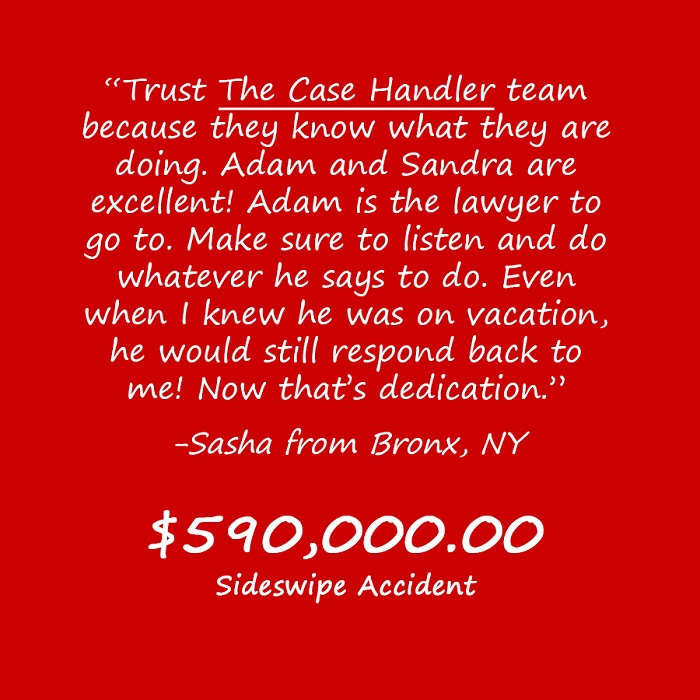 “Trust The Case Handler team because they know what they are doing. Adam and Sandra are excellent! Adam is the lawyer to go to. Make sure to listen and do whatever he says to do. Even when I knew he was on vacation, he would still respond back to me! Now that’s dedication.”

On November 7, 2014, Sasha was driving on Major Deegan Expressway when a commercial truck was merging onto the expressway from the ramp and did not yield the right of way to other vehicles on the highway.  As a result, the truck driver sideswiped the entire right side of Sasha’s car.  Sasha remembers getting hit and swerving into the left lane, but thankfully she got back into her lane before hitting another vehicle.  According to the truck driver on the police report, the sideswipe accident was caused by Sasha forcing her vehicle into his lane…and the police said there were no injuries!  After the accident, Sasha was taken to Montefiore Hospital by a private car where she was evaluated, treated, and discharged home with pain medication.

As a result of the side collision with the truck, Sasha’s body was jolted to the side.  She felt immediate pain to her neck and back.  Months after the accident, Sasha continued having neck pain on the right side down into the right shoulder, which was associated with spasm, numbness, and tingling sensation to her right hand at the 4th and 5th digit fingers.  She had no function of her right hand for months and had to drop out of school. Sasha attended physical therapy and chiropractic care with mild improvement. Ultimately, Sasha had to undergo two cervical epidural steroid injections and neck surgery.

Sasha listens to Adam regularly on the radio.  After her accident, she knew to contact The Case Handler team at Pollack, Pollack, Isaac & DeCicco!  Proving Sasha’s innocence and injuries caused by the accident was not going to be an easy task, considering the inaccurate statements on the police report and the fact that Sasha had a prior neck injury before this accident. The truck driver’s insurance company, StateFarm, denied liability and said that it was Sasha that merged unsafely!  They flat out refused to pay anything to her.  With the help of our team, we ALSO refused to back down and successfully negotiated a fair and just settlement of $590,000.00 to settle Sasha’s bodily injury claim! 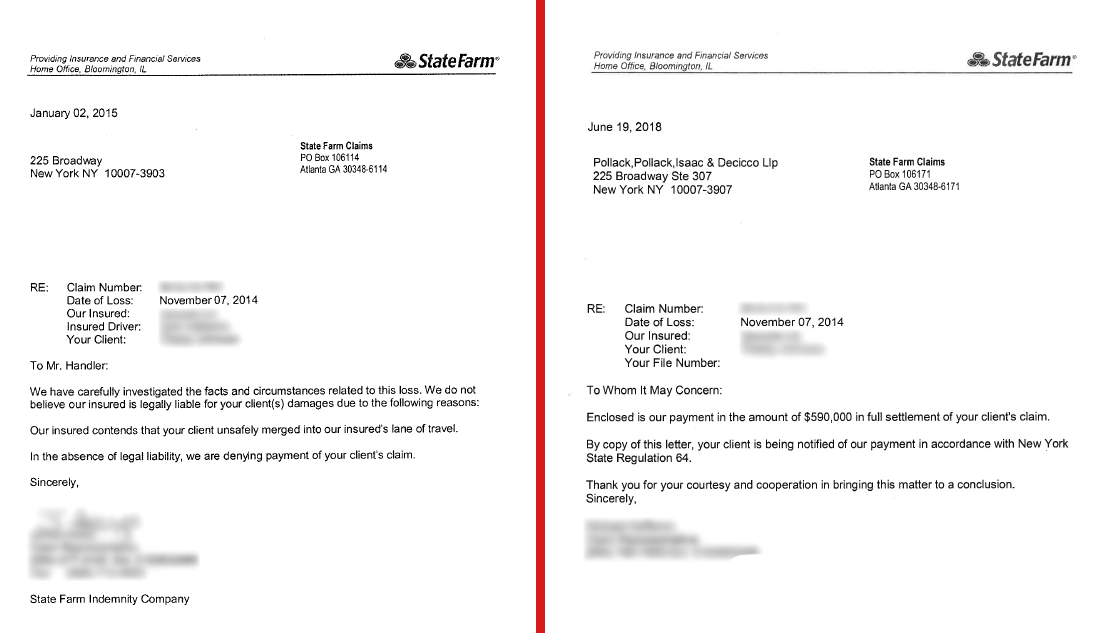 When the odds are stacked against you after a car accident, remember that you don’t have to face it alone. Even when Sasha was in a difficult situation, it didn’t stop her from reaching out to a lawyer for help.  Dealing with the insurance company and making sure that they pay a fair settlement is a major undertaking!  With the help of an experienced legal team by your side, you can rest assured knowing that your case is in good hands while you focus on recovery.  If you or a loved one were (or are ever) injured in an accident, contact a Bronx sideswipe accident lawyer that you can “trust”.