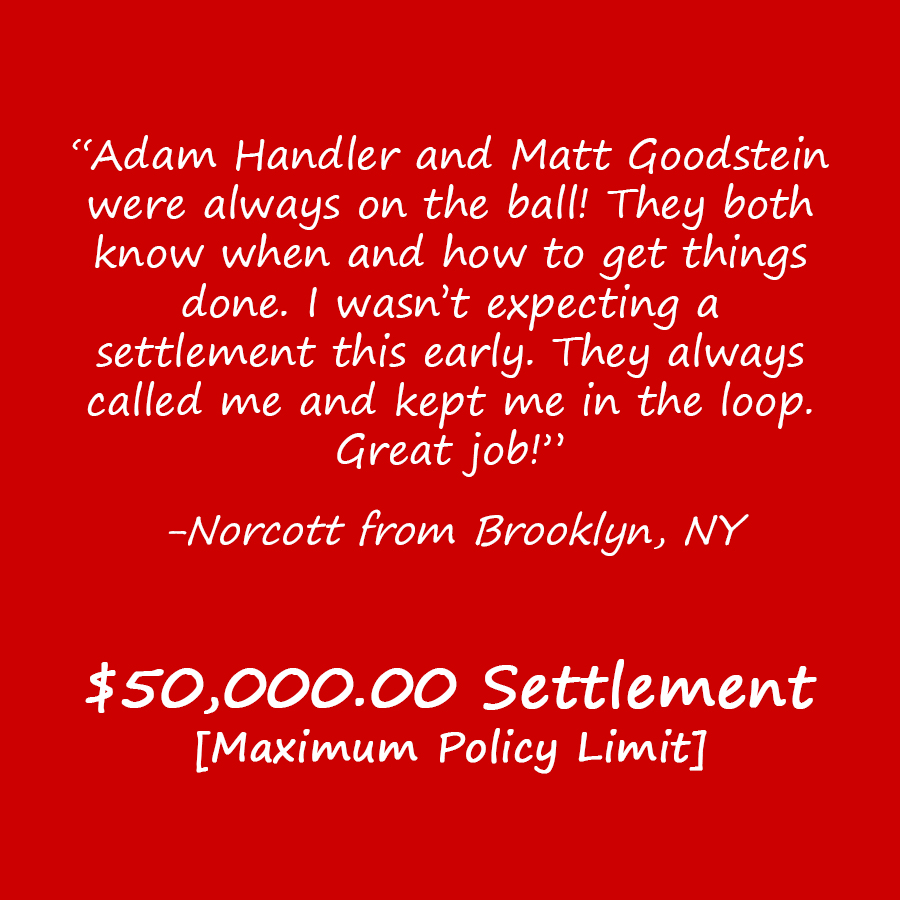 “Adam Handler and Matt Goodstein were always on the ball! They both know when and how to get things done. I wasn’t expecting a settlement this early. They always called me and kept me in the loop. Great job!”

Norcott was sitting at a red light when he was unexpectedly rear-ended. The other vehicle that hit his car tried to claim Norcott stopped short in traffic, causing the accident. Norcott reported head trauma, but no loss of consciousness. A random individual approached Norcott on the scene of the accident and handed him a lawyer’s business card to contact (talk about ambulance chasing). Initially, he did not feel too injured and went to the doctor the next day when his pain grew worse. Norcott later went to Rutland Medical Rehabilitation Center, where he underwent two months of physical therapy on his right shoulder.

As a result of the car accident, Norcott suffered injuries to his back, neck and right shoulder. He had an MRI of his back that revealed herniated discs. He also experienced a sharp pain in his right shoulder, which worsened with movement. Norcott attended physical therapy three times a week for two months, which he felt did not relieve his pain. As a truck driver, he noticed the pain in his shoulder made his job particularly difficult. Finally, Norcott had an MRI on his right shoulder that revealed a partial ligament tear. He underwent arthroscopic shoulder surgery and missed time from work to recover.

Although Norcott had heard about Adam Handler’s personal injury practice, he contacted and hired the attorney from the business card that was given to him the day of the accident. After a few months with NO progress on his case and lack of communication with that attorney, Norcott contacted The Case Handler team! It was less than 7 months later since Norcott called us for help (or 9 months since the accident) that we successfully recovered the maximum policy limits of $50,000.00 from the Defendant’s insurance company!

Time and time again we have said it but it still rings true – as a victim in a car accident, you have only one shot to recover compensation for your injuries. This is why it is crucial to have a reputable legal team on your side. The Case Handler team knows how to handle insurance companies that don’t want to pay you a dime, which is completely unacceptable. If you or a loved one have been injured in a car accident, pick a team that “know when and how to get things done.”

For a free consultation with The Case Handler attorneys at Pollack, Pollack, Isaac & DeCicco, LLP, contact our team online or call 929-223-4195.