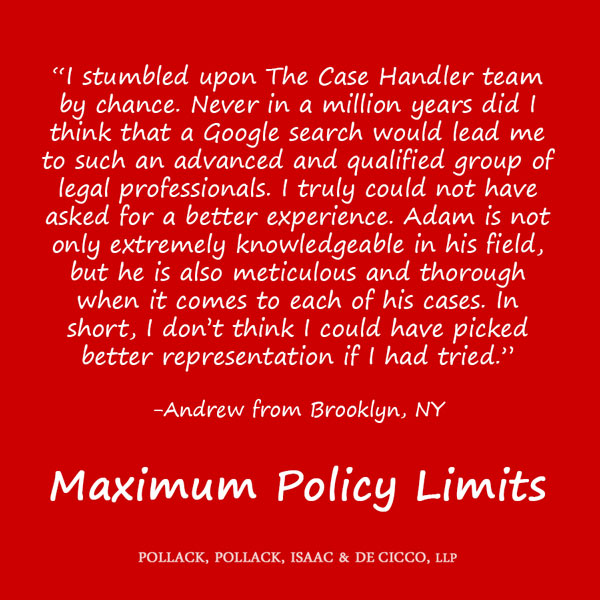 “I stumbled upon The Case Handler team by chance. Never in a million years did I think that a Google search would lead me to such an advanced and qualified group of legal professionals. I truly could not have asked for a better experience. Adam is not only extremely knowledgeable in his field, but he is also meticulous and thorough when it comes to each of his cases. In short, I don’t think I could have picked better representation if I had tried.”

It was a typical morning for Andrew on December 19, 2018. He woke up, got ready for work and then began his daily commute down Brooklyn’s Parkside Avenue. Only this time, as he approached the crosswalk at Saint Paul’s Place, Andrew was struck by a vehicle attempting to make an illegal left turn at a red light. Andrew reported that the vehicle had struck him from behind while crossing the street. Following the accident, he was rushed by ambulance to Maimonides Medical Center where he underwent x-rays of his left ankle and right shoulder.

According to Andrew, the accident had left him with severe pain in his shoulder, arm, back and ankle. He reported tingling and a piercing sting shooting through both his right arm and his left leg. X-rays revealed that Andrew had dislocated his right shoulder and fractured his ankle. His MRI exposed torn ligaments – RHL and Labrum – in the shoulder, as well as peroneal tendonitis building up in Andrew’s ankle. The damage Andrew sustained during the accident left his range of motion compromised, while also limiting his walking, lifting and carrying abilities. Suddenly, Andrew struggled performing day-to-day chores and tasks that he accomplished easily prior to the injury. He partook in physical therapy four times a week for six weeks and two times a week for another two weeks.

It is often both difficult and frustrating to find the right representation in times of crisis; luckily for Andrew, a Google search led him right to Adam and The Case Handler team at Pollack, Pollack, Isaac & DeCicco, LLP.  Almost immediately after contacting Adam, however, Andrew was convinced he had made the right choice! He was blown away by the delicacy, enthusiasm and overall devotion that The Case Handler assigned to his case. As the victim of a tragic and unpredictable accident, Andrew was able to take the necessary time recover while The Case Handler managed the case’s logistics. When all was said and done, Andrew received the maximum settlement from the insurance company as a reward for all of the pain and frustration he endured.

The truth is, car-pedestrian accidents are as unpredictable as they are devastating; you never know when tragedy will strike. While we hope that you never have to use it, save the number of one of our trusted Brooklyn Car-Pedestrian Accident Lawyers in case you or a loved one is struck by a motorized vehicle. While pedestrian safety is never a promise, The Case Handler Team will ensure that your money is.