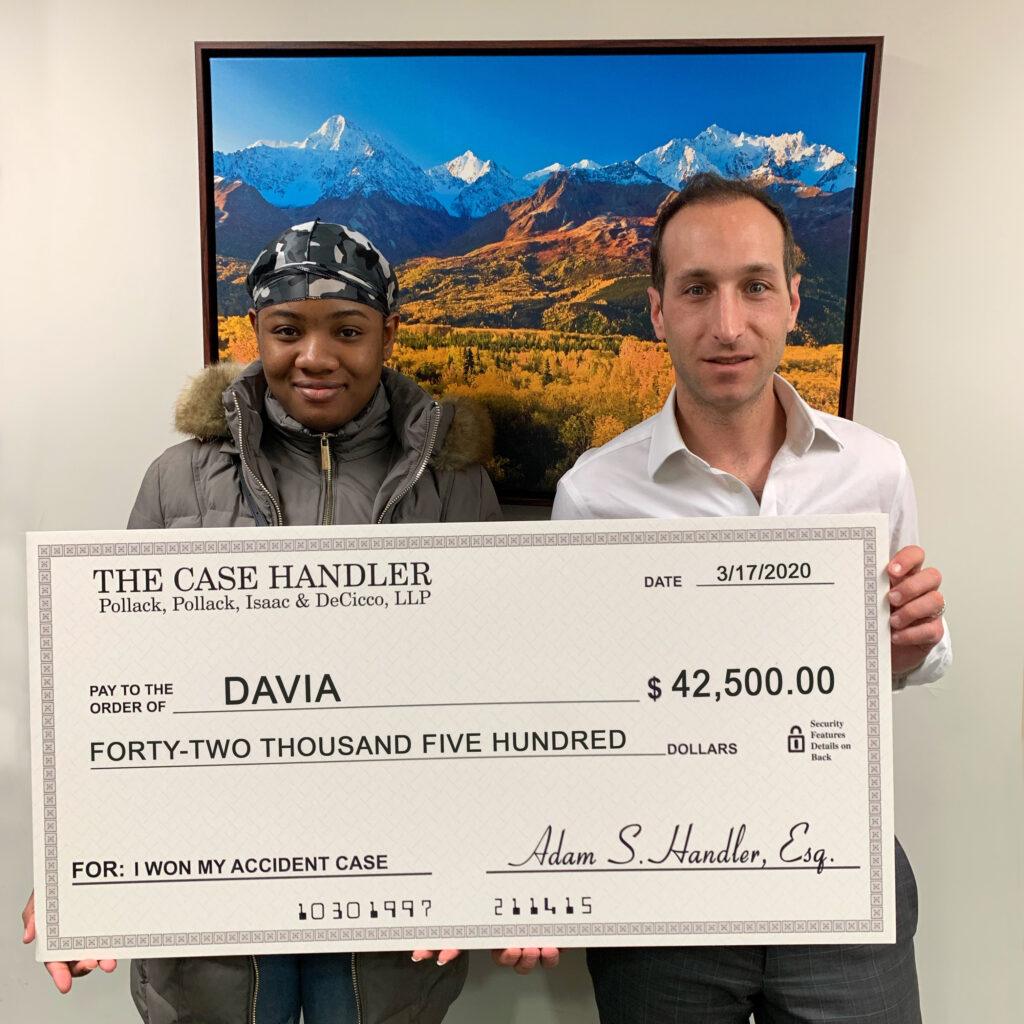 “Matt Goodstein and the entire team do the best work possible for their clients. The Case Handler team did everything so perfectly. There is no way they could have provided a better experience for me.”

On August 6, 2017, Davia was a passenger in a taxicab that was rear-ended by another vehicle driving at a high rate of speed. The cab was forced onto the grassy area at the entrance ramp to the highway. This caused the taxi she was in to flip over five times! Davia immediately smelled gas and instinctively used her elbow to knock out a window to escape. Thankfully, she did not lose consciousness! She was taken to Jacobi Hospital where she was treated and released later that day.

Davia suffered injuries to her facial area, right shoulder and right knee. As a result of the accident, she was confined to her bed for two weeks and to her home for approximately two months. The accident caused a face contusion and bruising. She also suffered a cervical spine sprain and multiple disc herniations. Davia sprained her right shoulder, right knee, and she had to manage ongoing tendonitis because of the accident. Her right knee ended up requiring surgery and she received multiple pain management injections for her back. She often had headaches, dizziness, and blurred vision as well. Davia now suffers from post-traumatic stress disorder, nervousness, and anxiety from the trauma of the incident. For months she participated in physical therapy three times a week.

The accident that Davia was in was beyond traumatizing. At a time when she was most vulnerable, she turned to her brother for help. Thanks to his recommendation, Davia contacted the The Case Handler team to help her with her personal injury case. Since there were 3 other people injured in the accident, the maximum policy limit was $100,000 for everyone to split. With the help of The Case Handler team at Pollack, Pollack, Isaac & DeCicco, LLP, Davia recovered MORE than the split amount of $42,500.00!

Being in an accident is extremely scary in itself. Additionally, having your car flip over five times when merging onto the highway is beyond scarring. After experiencing such a terrorizing incident, the last thing a person should have to worry about is the legal aspects of their case. Hiring a lawyer who you can trust and depend on is crucial. Remember, you only have one chance to get the most compensation in a personal injury case.  With only once chance, there should be only one choice, and that is YOUR Case Handler. For a reliable Mount Vernon taxicab accident lawyer who will fight for you, call our office today.