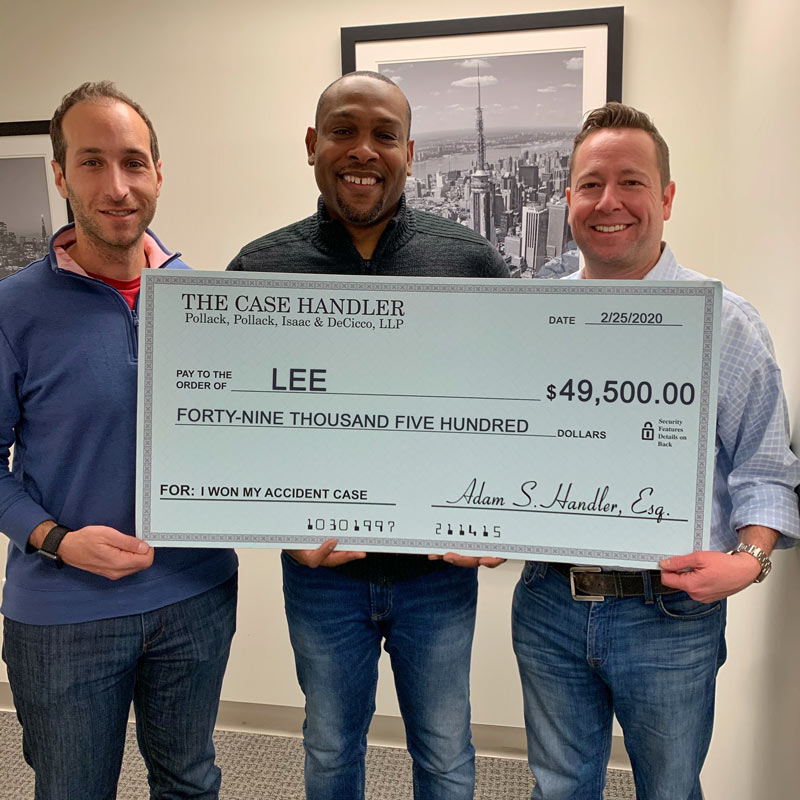 “The whole team reached out to me at different points during the case. If I had to rate my experience, I would give The Case Handler team a solid A! There was a clear, consistent flow of information. Adam and Matt constantly communicated with me throughout the process. Everyone was more than kind and they treated me with the highest level of respect. The team never left me in the dark and I felt comforted by their sincerity. I appreciate how hard their team pushes for the absolute maximum amount!”

On November 19, 2017, Lee was a passenger in his brother’s car on Old County Road in Nassau County. His brother (the driver) slowed down to prepare to make a left turn at the intersection of Zeckendorf Boulevard. As the light turned yellow, Lee’s car started to make the turn and another vehicle blew a red light and crashed into the passenger side of Lee’s vehicle! As a result, the vehicle Lee was in collided into a traffic light pole and caused damage to both the car and the control box. The other driver was driving at an excessive rate of speed, failed to yield the right of way, and was blatantly negligent to traffic safety laws. Consequently, Lee was knocked unconsciousness and sustained other serious injuries. Lee was transported by ambulance to Winthrop Hospital for evaluation.

As a result of the accident, he suffered injuries to his shoulder, neck, back and knee. Lee was hospitalized for several days, was bedridden for a week and confined to his house for another two weeks. He suffered from post-traumatic headaches, vertigo, and ongoing pain to all afflicted areas. Lee dislocated and tore a muscle in his right shoulder. He also tore his lateral meniscus in his left leg which would require him to consider surgery. He had multiple disc herniations in both his mid and lower back. Lee felt constant pain, deformity, tenderness, weakness, restriction of motion and loss of use within the affected areas.

Lee hired another attorney initially. Feeling unsatisfied with his choice, he turned to a person he trusted most (his cousin) and asked for a referral. Lee’s cousin told him all about Adam Handler. Lee picked up the phone and called The Case Handler team! Lee said that he instantly got a good vibe from Adam and decided he was the right lawyer for the case. With the help of The Case Handler team, Lee recovered a settlement award of $49,500.00!

No matter how safe a driver one might be, accidents happen. In Lee’s case, his brother followed every traffic safety law and still managed to end up in a serious collision. The truth of the matter is this: no one EVER plans to get into an accident.  That is why everyone should save the contact information of someone you believe to be an exceptional Nassau County automobile accident lawyer just in case. If you’ve been wrongfully injured as a driver or passenger, reach out to our skilled personal injury team that will fight “for the absolute maximum amount!”