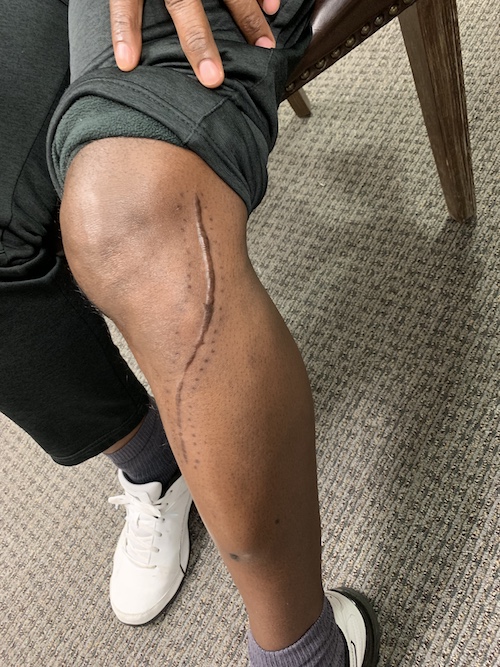 “Adam Handler and Matthew Goodstein are excellent attorneys plain and simple! They made me feel so comfortable throughout the process. The whole team called to check in on me frequently. My relationship and interactions with them felt like much more than a business transaction. They treated me like I was a family member. Adam and Matt made sure that I was listening to my doctor and resting because they cared about my well-being. There is nothing that The Case Handler team could have done better, everything went perfectly!”

On December 17, 2018, Livingston just finished working and was walking four blocks to his car. He was crossing the street between South 12th Street and 2nd Avenue in Nassau County when he was forcefully struck by an oncoming vehicle. The driver made a left turn while Livingston had the right of way. This careless and negligent act resulted in Livingston being rushed to the Winthrop Mineola Hospital Emergency Room. He was released that same day but was told to come back the next day for further evaluation and treatment.

As a result of the accident, Livingston suffered severe injuries to his left leg. He was hospitalized for two days, confined to his bed for four weeks and could not leave his house for thirteen weeks! Livingston fractured his left fibula and tibia. These injuries both required surgery and he was also required to have a surgical procedure on his left meniscus. Livingston is significantly more likely to develop arthritis at an accelerated rate around the afflicted areas. His injuries will likely require further pain management injections as well as a possible left knee replacement surgery. Due to the accident, Livingston now has pain, deformity, disability, tenderness, weakness and restriction of motion in his left leg, which is permanent. He remains totally disabled, out of work, and unable to pursue his usual occupation to the degree possible before the accident.

Livingston had heard Adam on the radio before the accident. He made the decision to save his number in the case of an emergency. The day after Livingston’s accident, they called to make an appointment with the doctor. The doctors told him he needed the No-Fault ID number; otherwise, the hospital would not be able to treat him. Since the accident just happened, he didn’t know it. Livingston’s wife called the insurance company and even they couldn’t find it in the system! While his wife was on the other line, Livingston called The Case Handler team. He spoke to Matt and even though we weren’t hired yet, Matthew immediately started working on finding that number. About half an hour later, Matt found the number. Livingston’s wife was still on the phone with the insurance company and we got it before them! Livingston knew at that moment The Case Handler team were the right attorneys for his case. With the help of Adam, Matthew and the entire Case Handler team, Livingston received a settlement award of $750,000.00!

Livingston was simply a victim of an accident that could not be anticipated. Fortunately, he saved Adam’s number just in the case of an emergency. After Livingston was hit, he was in so much pain that he couldn’t focus on the legal aspects of the case. His focus was on resting and recovering. The Case Handler team made sure to make the process as easy as possible for him. Livingston even said, “There is nothing that The Case Handler team could have done better, everything went perfectly!” Our Nassau County pedestrian accident lawyers exceeded expectations by working as a trustworthy and reliable team. If you were involved in an accident of any kind, contact The Case Handler attorneys today!