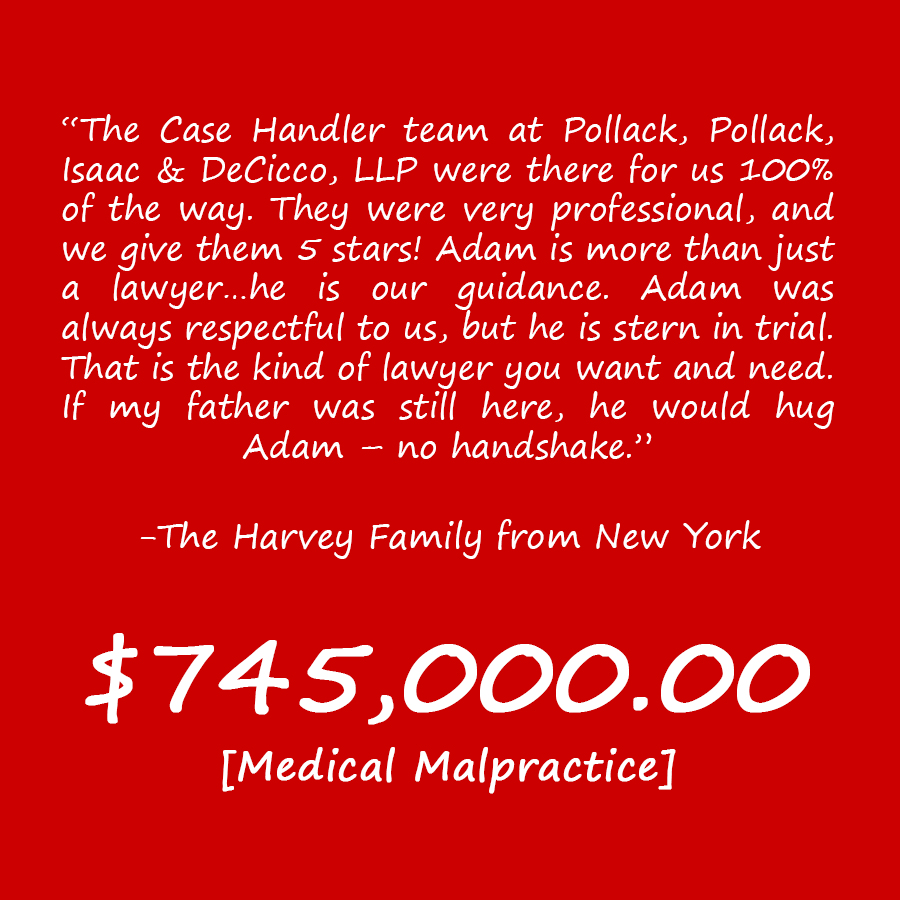 “The Case Handler team at Pollack, Pollack, Isaac & DeCicco, LLP were there for us 100% of the way. They were very professional, and we give them 5 stars! Adam is more than just a lawyer…he is our guidance. Adam was always respectful to us, but he is stern in trial. That is the kind of lawyer you want and need. If my father was still here, he would hug Adam – no handshake.”

– The Harvey Family from New York

Mr. Harvey first exhibited symptoms involving severe vomiting on a daily basis, while he was incarcerated (taken into ICE custody). His sickness began around October 2010. He put in a sick call resulting in a doctor prescribing Prilosec. This reduced the vomiting frequency for three to four months, and then the treatment stopped helping entirely. The doctor tried adding other treatment methods that did not reduce Mr. Harvey’s symptoms. Although an endoscopy was recommended around February – March 2011, the endoscopy was not performed until July 2012. His symptoms worsened to the point where he lost up to 70 pounds. Finally, he was able to see the specialist for an endoscopy on July 25, 2012. The endoscopy revealed an ulcer and stage four cancer of the stomach, which spread to the liver. The very next day, Mr. Harvey was released from immigration custody and was no longer detained.

Mr. Harvey was a victim of unnecessary pain and suffering related to nausea, vomiting, weight loss, iron loss anemia and abdominal pain. Had the diagnosis been made earlier, he would likely not have required extensive abdominal surgery, and would have been able to detect and treat his stomach cancer. The immigration officer was responsible for delaying the process regarding Mr. Harvey seeing a specialist, and the medical care provider failed to properly treat Mr. Harvey. As a result of the delay in diagnosis, Mr. Harvey possessed a metastatic disease that was no longer curable with surgery, and he tragically passed away as a result of their negligence.

While he was still alive, Mr. Harvey and his family came straight to Adam Handler for legal assistance. Our team was appalled by the defendant’s initial offer of $100,000. Their second offer jumped to $400,000, which was better but not what we thought the Harvey family deserved. With the support and legal guidance of The Case Handler team, the Harvey family recovered $745,000.00!

Medical malpractice is a difficult matter to navigate as a victim or family member of a victim. The Case Handler team at Pollack, Pollack, Isaac & DeCicco, LLP has helped many injured patients and their families get the financial relief they deserve from grossly neglectful medical institutions. Mr. Harvey suffered severely as a result of medical negligence and while no amount of money will be enough for the loss of his life, justice was served. If you are a medical malpractice victim or family member of a victim in New York, contact a dedicated NY medical negligence attorney that will be “the kind of lawyer you want and need.”