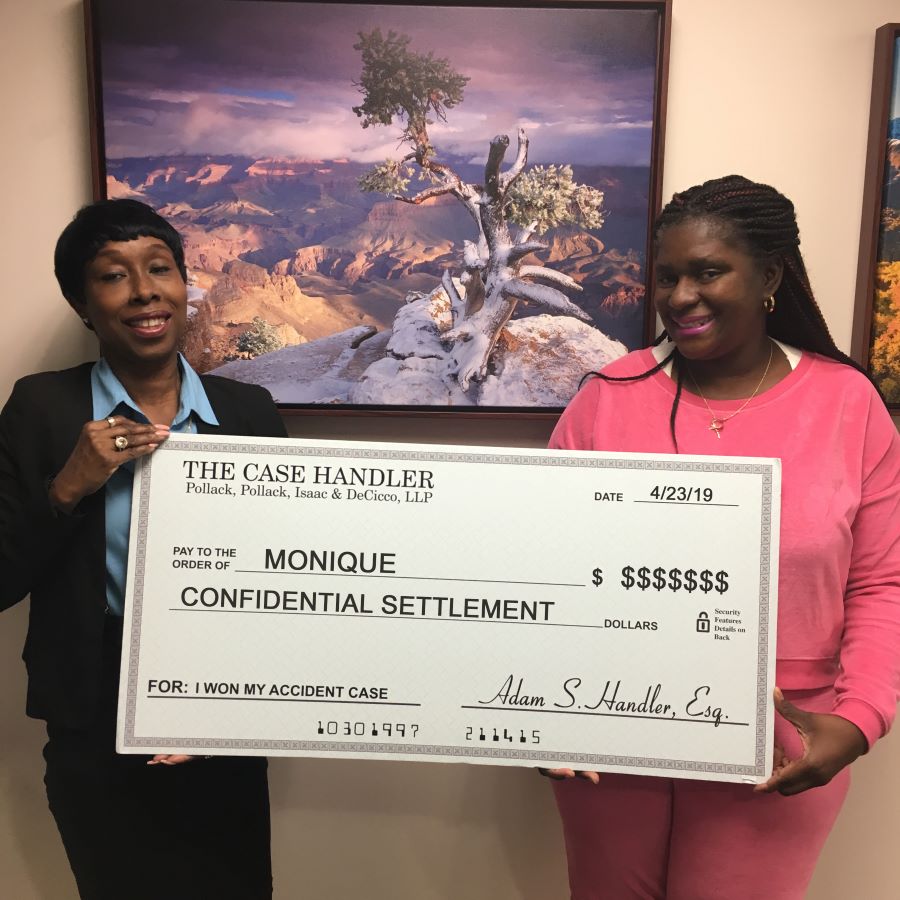 “Adam is the best. They are a good team that works really well together. The Case Handler team at PPID is empathetic and truly cares for their clients. They will bend over backwards for their clients just how they did for me. I would recommend Adam Handler without hesitation.”

On October 7, 2016, Monique was a passenger in a car that was in the HOV lane (also known as the carpool lane) driving westbound on the Staten Island Expressway. She was driving with her two kids in the back seat heading to Virginia when suddenly, she was involved in a multiple rear-end collision.  As a result of getting rear-ended, Monique’s vehicle was pushed forward into the car in front of her.  Thankfully her children were not injured, but Monique was. She was rushed by ambulance to Richmond University Medical Center where she was evaluated and later discharged home.

Monique suffered injuries to her neck, shoulders, and lower back. She described her neck pain as a 9/10 in intensity and felt worse with motion. The pain in both of her shoulders felt sharp and she rated the pain as 9/10 in intensity. Her shoulder pain worsened whenever she lifted her arms overhead. Monique also complained of a constant throbbing lower back pain, which she also rated 9/10 in intensity. Monique had difficultly bending, lifting and carrying things that were not a problem prior to the accident. She was subsequently evaluated at New York Physical Therapy Wellness where she received physical therapy 3 times a week and later received several epidural steroid injections to alleviate her pain.

For years Monique was a fan of Adam Handler’s work in the community. After her accident, she remembered just who to call since she saved Adam’s number on her phone. Monique contacted our personal injury team at Pollack, Pollack, Isaac & DeCicco, LLP and we are glad that she did. In the end, The Case Handler team was able to recover thousands more than the insurance company initially offered to Monique!

Monique’s accident is another example of the insurance company attempting to take advantage of the situation by offering a low settlement amount. The Case Handler team would not allow Monique to be cheated out of the compensation that she deserved. As we have said time and time again, accidents are often impossible to anticipate so it’s necessary to save the number of a top Staten Island multi-vehicle crash lawyer. While it is our hope that none of our family or friends are involved in an accident, know that The Case Handler team is here for you and will “bend over backwards” to help you too.