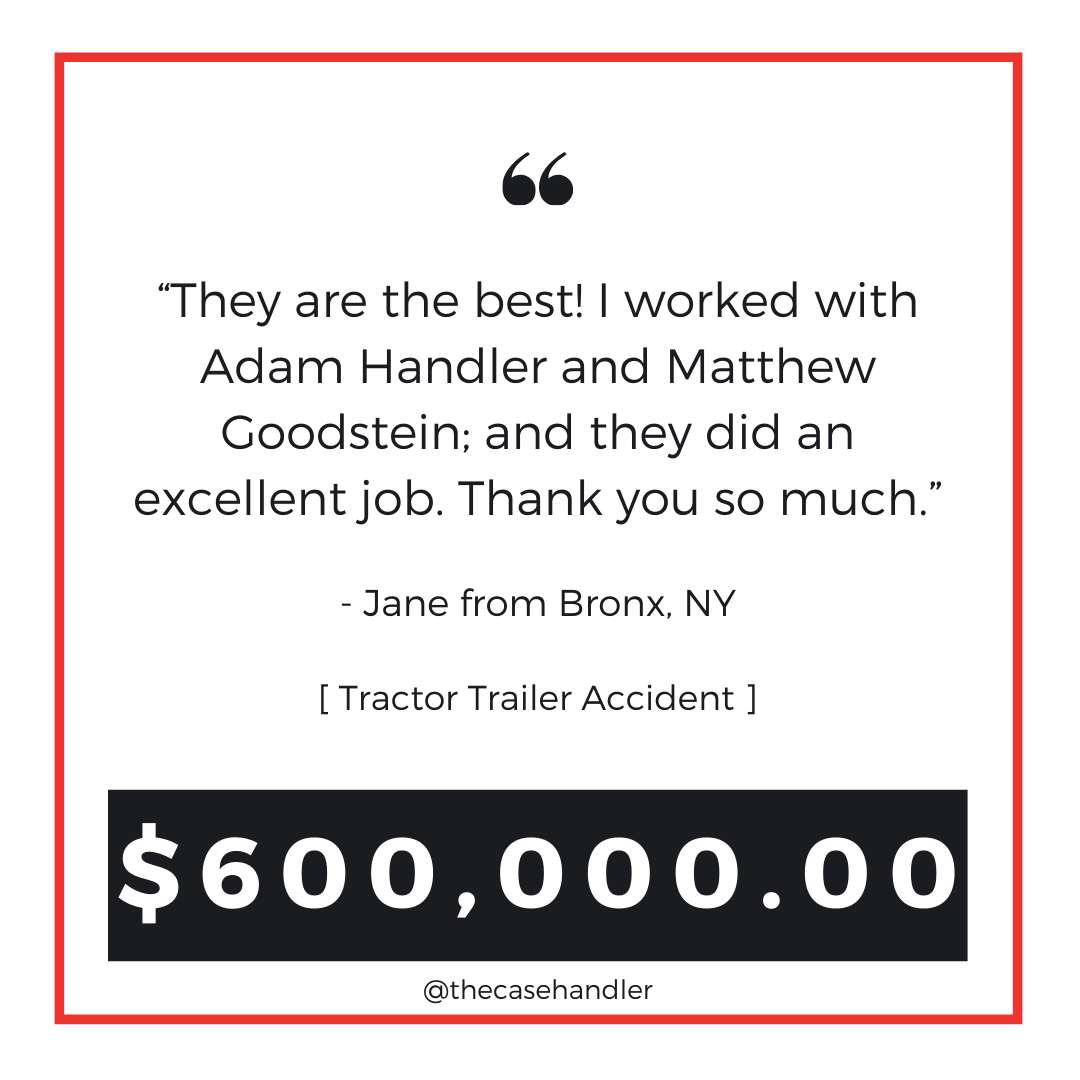 “They are the best! I worked with Adam Handler and Matthew Goodstein; and they did an excellent job. Thank you so much.”

A day that should have been bright and joyful turned into a nightmare within seconds. All Jane could see was doom and gloom. It was Saturday, August 11, 2018 – not Friday the 13th! How could this be? Jane was driving her 2009 Toyota Suburban southbound on Interstate 95 cruising at the stipulated speed limit in the extreme left lane. She did not realize that a nightmare was brewing beside her. A 2012 two-door Honda sedan, that was driving in the right lane, began spinning out of control. The car spun and stopped in front of a tractor-trailer that was traveling in the middle lane. Hearing the commotion to her side, her heart started beating extremely fast in panic, her eyes were wide open in shock. The tractor-trailer was unable to stop in time and collided with the 2012 Honda sedan that had stopped in front of it, causing the sedan to collide with a concrete barrier to the left. In an attempt not to strike the Honda sedan, the driver of the tractor-trailer veered to the left causing Jane’s worst nightmare to be realized. This massive truck swiveled in front of her, colliding with the front right side of her vehicle! As if that were not enough, she then struck the concrete barrier to her left.  It was no joke! Jane immediately had a headache because she hit her head. She felt excruciating neck, shoulder, lower back and left leg pain.  The fire department, police, and emergency services all rushed to the scene of the accident. She and other injured parties were expeditiously taken to Montefiore New Rochelle Emergency Room where she was treated.

Jane was so severely injured that she had to have MRIs of her cervical spine. These showed that she had a C5 – C6 and C6-C7 disc herniation. She also had severe cervical radiculopathy (pinched nerve) and failure of conservative management over a year.  Leading from this, Jane not only had to get injections in her shoulder, but also had to complete an anterior cervical discectomy and fusion with cage and instrumentation at C5-C6 and C6- C7. Due to the pain she was experiencing, she could not sleep at night. She would often wake up with nightmares. She also became terrified of driving, remembering the accident whenever she got in a vehicle.

There is a popular saying, “it is not what you know, but who you know that counts”. Jane knew Adam Handler “The Case Handler” because she used to work with him. So, when this nightmare began, she knew who to call to handle this nightmare she was going through. And we are thankful that she did! The Case Handler team successfully recovered $600,000.00 for Jane! With the help of our personal injury team at Pollack, Pollack, Isaac & DeCicco, LLP, Jane received $100,000 from the vehicle that was primarily at fault and an additional $500,000 from the tractor-trailer who ultimately conceded some liability after hearing from The Case Handler! 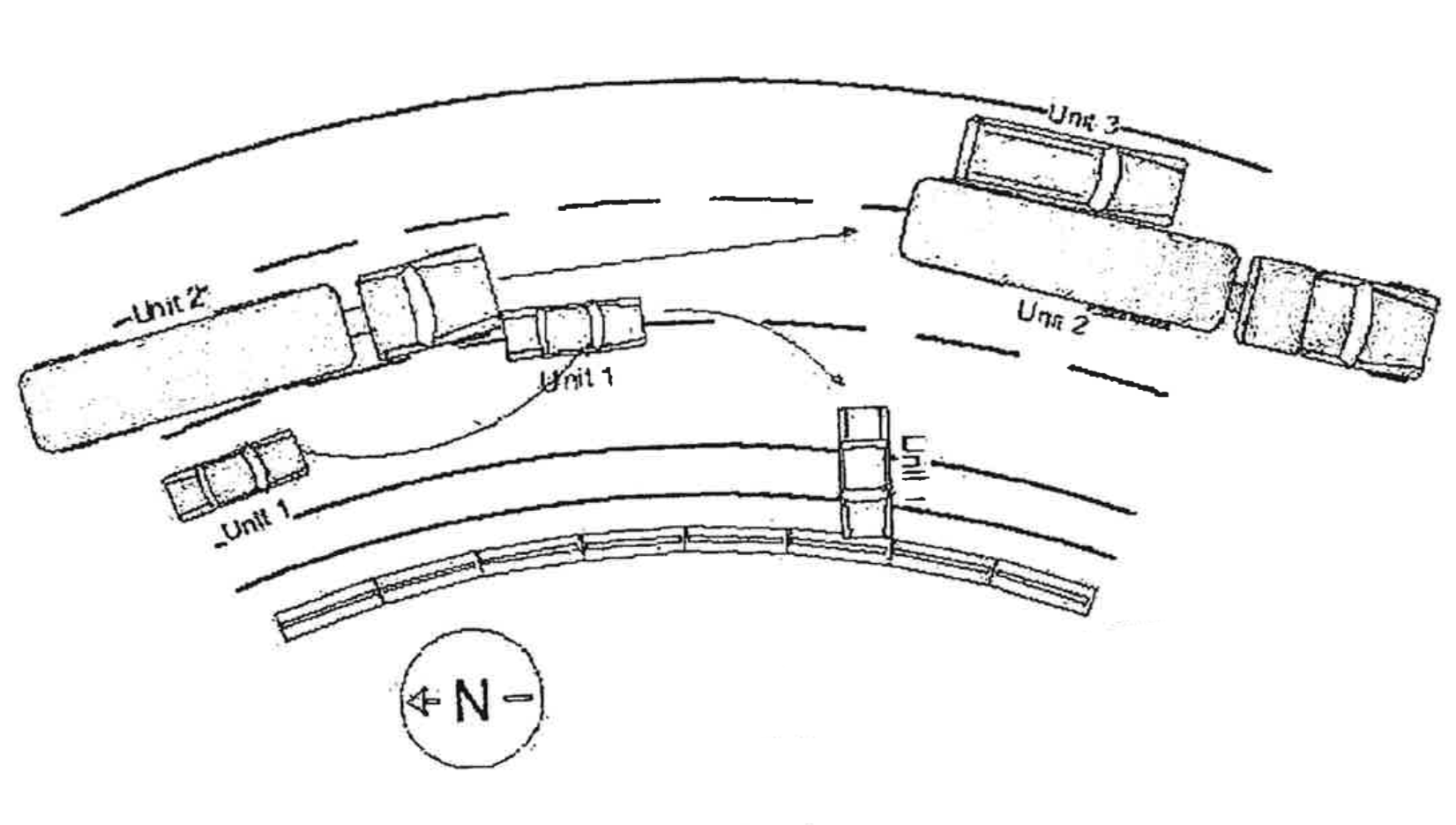 When sunny days turn into dark and terrifying nightmares; it is quintessential that you call an attorney who knows how to properly navigate your personal injury case. An attorney who can turn your nightmare into a dream come true! Here, Jane received not merely $100,000 from the vehicle that was primarily at fault, but also $500,000 from a vehicle that was less at fault! It takes years of experience to properly do this. If you are experiencing a nightmare similar to Jane, call The Case Handler team at Pollack Pollack, Isaac & DeCicco, LLP. A team that knows how to turn your tragedy into a positive life-changing event.