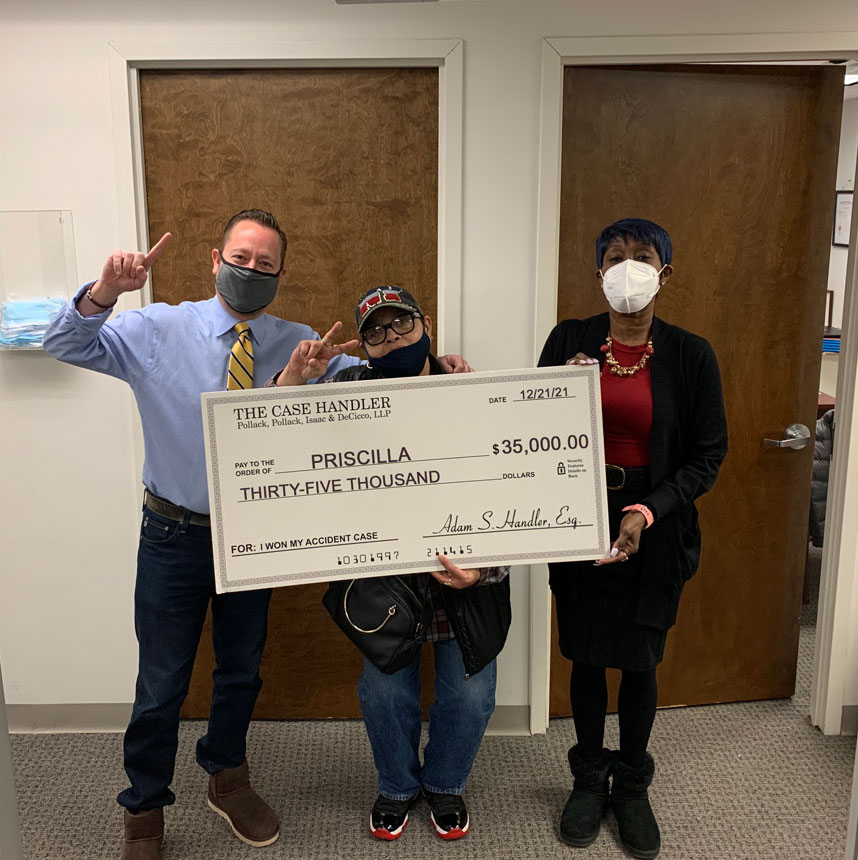 “Grateful for this team right here.”

On December 5th, 2017, Priscilla was riding in a cab when the traffic light turned red at the intersection of Rockaway Parkway and Church Avenue in Brooklyn, NY.  She paid the cab fare and got out of the cab while it was stopped. As she stepped out of the taxi, she was struck by another car! The driver of the vehicle that hit her stated that he was driving northbound on Rockaway Parkway when he made a left turn on Church Avenue and claimed that “the pedestrian ran across the street, not in the crosswalk.” Priscilla was transported by ambulance to the emergency room at Brookdale Hospital Medical Center where she was evaluated, treated, and released home.

As a result of the accident, Priscilla injured her lower back, right knee/ankle, and left rib. She had difficulty with prolonged walking, standing, sitting, using stairs, and heavy lifting. Her lower back pain would radiate to both legs, but felt worse on the right side. After medical examination, Priscilla was told that she suffered a fracture in her right leg that required multiple sessions of physical therapy and surgical repair on April 20th, 2018.

Priscilla initially hired another law firm to take her case, but sadly never spoke with an attorney at that firm. Thanks to a recommendation, she reached out to The Case Handler team! Despite the fact that Priscilla suffered similar injuries in a previous accident, had impaired ambulation prior to this accident, and the other driver claimed that she “ran across the street,” our skilled Brooklyn pedestrian crash lawyer at Pollack, Pollack, Isaac & DeCicco, LLP recovered $35,000.00 for Priscilla!

It may seem commonsense to be able to speak with the attorney you hire when you need them but looking at Priscilla’s case, you can see that not all attorneys operate the same way. While some firms may only have their staff communicate with their clients, our attorneys at PPID take an active role in communicating with clients and handling complex personal injury claims that may involve previous injuries like Priscilla had.  That is what an injured victim needs and deserves in a lawyer. If you or a loved one is ever the victim of a Brooklyn pedestrian crash, The Case Handler team will be there for you every step of the way.